When you book with an account, you will be able to track your reservations and get access to coupons page.
Sign Up
3062
Book From Locals > Cappadocia > Cappadocia Green Tour

The fairy chimneys of Cappadocia were born of a millenia of volcanic eruptions and the landscape was covered with ash and volcanic rock.  These deposits have undergone erosion until they have formed rather magically into the chimney like columns that you see today.  This soft rock is been perfect for carving and so people chose to carve their homes and places of worship here.

Cappadocia exists on top of a high plateau located in central Anatolia and is renowned all over the world for its volcanic landscape and adequately naed fairy chimneys that have been home to different civilisations throughout history.  Cappadocia is a place that will enchant both geologists and historians alike and ignite the imagination of anyone who visits.  It is perhaps impossible to think of Turkey without seeing the hot air balloons that rise above this beautiful landscape in the minds eye and it is a destination not to be missed.

Eeven more than the geological wonder of Cappadocia is the fact that the area is steeped in history.  The earliest settlements in Cappadocia date back to the Paleolithic era. From Hitties to the later Christians, Persians to modern day Turks, this has been a hub of civilisation for thousands of years and is something not to be left off your ‘must visit’ list.

The Cappadocia Green Tour travels through the South Western part of Cappadocia and ends in the Ihlara Valley.  For the most part of your tour you will be in the company of our professionally qualified guide and coach driver.  You will be picked up at around 09:30 from your hotel or apartment and brought initially to the Esentepe Viewpoint.  After a brief getting to know you talk with your guide, and an introduction to your driver,   you will have a photo opportunity at the Avanos Goreme viewpoint overlooking the valley, where  you can partake of refreshment if you so wish, before setting off to Uchisar Castle.

Uchisar Castle is the highest viewpoint over the Goreme Valley.  Arguably the best view and with the scenic Pigeon Valley below the valley is so named because of the thousands of pigeons carved into the tuca during times of antiquity.  Some  local cave dwellers even paint their homes white in order to attract the lucky pigeon droppings onto their property.  This is one more great photo opportunity overlooking the ancient dovecotes of Pigeon Valley.

Perhaps the most popular part of this tour is the Derinkuyu Underground City of Cappadocia.  Thought to be a wonder of engineering for the ancient world, Derinkuyu has no less than eight subterrenean levels that were once inhabited by human beings.  The levels are all interconnected by tunnels, having been carved out of the soft volcanic stone.  It is hard to comprehend how these families even kept livestock in these underground homes, but they did. You will explore with your guide this amazing archaeological wonder.

From here you will go on to discover the most amazing scenery of the Ihlara Valley.  Starting at Belisirma Village and ending at the Monastery of Selime.

The Ihlara Valley Canyon is over 100 metres deep and 10 kilometres in length.  Formed by the active Mount Hasan Volcano and erosions from the Melendiz river, over hundreds and thousands of years ago.  You will be able  retrace the footsteps of the ancients as you hike this amazing valley and its landscape.  You will pass, with the help of your guide, hidden cave churches and houses throughout.  The hike continues for approximately 3.5 kilometres along the side of the river,  lasting around an hour, until you reach the village of Belisirma for lunch and a restaurant break.

If your appetite has only been whetted by this small hike you may continue after lunch for a further 6 kilometres along the river bank until you reach the original point where you entered the Ihlara Valley and the car park where your coach is waiting.  Many people do not choose to hike further and head on to Yaprakhisar village for, what could be considered, the ultimate views of the fairy chimneys and then 1 kilometre later to see Selime Monastery.  This is one of the biggest and most fascinating of its kind in the area, and a high spot to end your green tour of Cappadocia.

It should be noted that this is a typical Green Tour route and may be changed accordingly.  Primarily with its underground city tour, it will contain most if not all of these highspots.

How much is Cappadocia Green Tour?

Is there a lot of walking?

Because of the nature of the tour it is only for the physically abled and those who can walk for some distance comfortably.  The nature of the terrain requires some stamina in parts, although on the whole is a fairly comfortable and fascinating tour.  If you are a history buff then it is for you.  Young children may not appreciate this tour and is therefore discretionary for families with youngsters or the elderly.

What do i bring with me?

Good suncream is always a must in summer season, likewise a good sun hat and comfortable clothing.  Bottled water is advisable as you may not be able to purchase along the river hike.  Do bring your camera for the most amazing photo opportunities you are ever likely to have.  Some money for refreshments and purchases along the way and last but not least do wear good footwear, as there will be some walking involved in this tour.  Flip flops are not advisable but shoes that can be tied or fixed are.

How long does the tour last and which days can I go?

Days may change according to weather condition but normally departs seven days a week and the pick up time will be around 09.30 from your hotel or apartment. The tour should run for approximately 8 to 9 hours.

Yes, you will stop for lunch just after midday in Belisirma Village in a local restaurant next to the river. 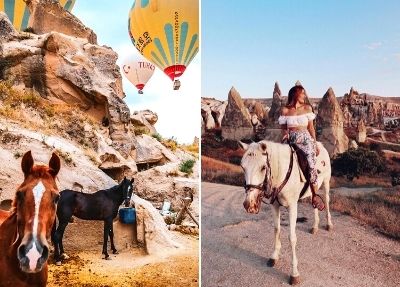