When you book with an account, you will be able to track your reservations and get access to coupons page.
Sign Up
3017
Book From Locals > Cappadocia > Cappadocia Blue Tour

Cappadocia covers a vast area for you to tour, for this reason the tours have been colour grouped to make your choice easier.  The Blue tour will take you to the Southern Cappadocia valleys and the fairy chimneys!  This is the region where you will also find the underground city of Kaymaklı which is also included as part of this tour.  With an English speaking guide to accompany you on your tour, you will find the information entertaining and educational, giving you a wider vista of what life was like in the Goreme  Valley back in the annals of time.

Red Valley  is one of the best places in Turkey to watch the sunset, the rock formations appearing to be of a crimson shade, as the sun sets over the fairy chimneys.  Rose Valley equally as beautiful, is favoured by hikers for its stunning scenery.

Uchisar Castle is one of the highest points in this area, with steps to climb to the top, you will have a 360 degree view of this amazing landscape.  Cameras at the ready!

Similarly, Ortahisar Castle restored in a similar way, is made accessible by a stone staircase that will take you to the top and the astounding panoramic views thereon.

The final stop of your tour will be Kaymakli Underground City.  Prepare to be amazed at this ancient feat of humanity.  Reaching down eight levels, this underground city served for daily life, unbelievable considering even the livestock were contained underground.  Connected by a series of tunnels you will be able to see stalls and stables where the animals were housed, wineries and kitchens, food halls and churches, to mention but a few.  You are currently only able to access four of these floors, but nonetheless, it is incomprehensible as to why human beings chose to live this far underground.

With a hotel pickup at around 09:30 you will be greeted by your guide and taken to the first stop of your tour.  The tour lasts for around 8 hours, do come prepared with a water bottle to stay hydrated, and comfortable footwear (absolutely essential).  Typically you will visit the Old Greek Town of Mustafapaşa, Red & Rose Valley, Uchisar Castle, Ortahisar Castle and Kaymaklı Underground City.

This itinerary is subject to change according to tourist traffic throughout the day and your guide will make sure that you arrive at each stop at the best possible time to avoid crowds wherever possible. When you have completed your tour your guide and coach will return you to your Cappadocia hotel.

How much is Cappadocia Blue Tour?

What other colour tours are avaliable and where do they go?

What is included in the ticket price?

Your transfer and air conditioned vehicle throughout the tour.

What should i budget for?

Please do bring enough money for any shopping or snacks that you wish to purchase throughout the day.

Are there any restrictions as to who should go?

Due to the amount of walking involved in this tour, anyone who has mobility difficulties should give it a miss.  Younger family members would find it difficult too, use discretion when booking.

Anything particular i would need to bring with me?

Good walking shoes are the order of the day, with comfortable loose clothing during the main summer season.

Sun cream, and sunglasses are a good idea together with a sun hat.

Bring some money with you for refreshments and sundries.

Don’t forget your camera; this landscape is a photographer’s dream! 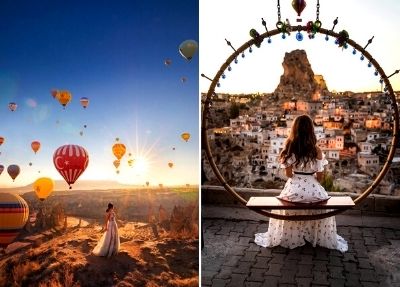