When you book with an account, you will be able to track your reservations and get access to coupons page.
Sign Up
2841
Book From Locals > Bodrum > Bodrum Rhodes Day Trip

Due to its close proximity to the Greek Islands, a ferry boat from Bodrum to the ancient island of Rhodes becomes a delightful day trip. Ferry boat will take you into the old town of Rhodes, the island’s capital, with its astoundingly intact medieval walls.  The Templar Knights saw to the building and fortification of this town and erected various fortress castles throughout the island.  Rhodes Town is an open air museum to antiquity.

It holds many anomalies such as ancient Greek temples, nestling along the foundations of a 14th century townhouse.  The Grand Master’s Palace holds dominance over the old town and visible from the sea it is one of the first buildings you notice on arrival.  With ancient Mosques and even more ancient temples to the Greek Gods, this is a town unlike any other.  Relatively modern Venetian architecture is reminiscent of another era again.  The architecture of Rhodes is a feast for the inquiring mind.

If its not the antiquities you came to admire, the new town sits neatly alongside the old town walls, and is home to many cosmopolitan shops found all over the modern world.  On the Island of Rhodes the old and the new sit quietly alongside the ancient, waiting patiently every day for the fast catamarans and the cruise shops to dock.

For lovers of more recent history, the Nazis occupied Rhodes during the second World War, transferring almost 3000 of the Jewish population from the ports of Rhodes and Kos, to Auschwitz Camp in Poland.  Less than 300 returned.  To commemorate this atrocity the Square of the Jewish Martyrs can be found in the walls of the old town close to the port entry of St Catherines Gate.  The square is marked by a black obelisk carved with the names of the families who suffered in Auschwitz, and also a sea horse fountain.  The fountain indicates  the three ships that took the Jewish martyrs to their deaths and is an ideal cool off point in your day.

Today that square is a leafy oasis among the stone walls, where a beer served in a boot shaped glass is always available to quench your thirst while you contemplate the history of this amazing town.

On a much lighter note, there is a small crescent shaped beach near to the port where most people stop for a cool off after walking the warren of streets in the old town.  Clear green waters within a stones throw of the port and your waiting catamaran.

You will be picked up from your accomodation at 08:00 or near to and taken to the port, where you will pass through customs and board the fast catamaran to Rhodes.  Please note that specific pick up times will be confirmed upon booking according to your location in Bodrum.

The journey takes around 2 hours and 20 minutes.  The fast catamaran has a coffee bar for snacks and drinks and is one of the most comfortable ways to travel by sea. With W.C.s on board this is an ideal time to grab a bite to eat or have a snooze until you get to Rhodes.

On arrival in Rhodes you will have free time to discover the old or new town and enjoy the sights, shopping and food found on the Island.

You return to the port of Rhodes and to your fast catamaran at the designated time.  Your captain on board will tell you what time to return and it is advised that you return at least half an hour before leaving, to avoid the crowds at passport control in the port of Rhodes.

Your transfer will pick you up at Bodrum Harbour for return to your original pick up point.

How much is Rhodes Day Trip from Bodrum?

Is this day trip for me?

Your visit to Rhodes becomes a two country holiday. It is a long day but with so much to do and see you will hardly notice it. Families, singles and groups enjoy this tour.

What is included in the price of the ticket?

Your pickup and return to the Bodrum area, plus your day return ticket to Rhodes by fast catamaran.  Port taxes and insurance is also included.

Firstly, your passport! You are travelling out of Turkey and into Greece and you must produce your passport and any necessary paperwork before you can leave.

Will my tourist visa be affected?

Your passport will be stamped out of Turkey and restamped when you return. This does not affect your statutory 90 days visa.

What currency should i take with me?

Where possible bring Greek currency of euros with you. This can be purchased at banks or change offices in Bodrum the day before you travel. Alternatively there are cash machines throughout the city where you can use cards.  There are also exchanges throughout the old and the new city for you to change money into euros.

What should i wear / take with me?

Bring sun cream and glasses and a hat if necessary.  Generally Rhodes is around 10 degrees cooler than Turkey, but not always! Don’t forget comfortable walking shoes.  The old city has mainly cobbled streets and these can be hard if you wear flip flops or heels.

Wear your swimsuit beneath your comfortable clothing and bring a towel as the small beach on the way back to the port may be too inviting and you will wish you had worn them.

What if i get lost in the old town?

Don’t be afraid to discover the warren of cobbled medieval streets of the Old Town.  All streets lead to the outer walls and ultimately back down to the port.

Anything else i should know about?

If you order a ‘large beer’ at a local taverna, be aware that the boot shaped glasses come in three sizes, small, medium and large. Medium is the equivalent to a pint and a large beer is a whopping 2 pint glass. Just one more reason to visit this lovely island. 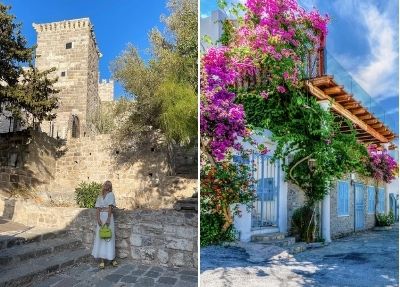 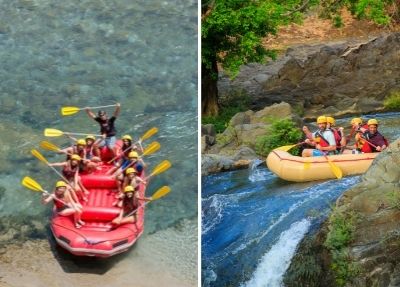