When you book with an account, you will be able to track your reservations and get access to coupons page.
Sign Up
2778
Book From Locals > Belek > Belek Lake Salda & Pamukkale Tour

After a visit to Salda Lake and Pamukkale you would be forgiven for believing that you were in another country or maybe even on another planet.  The travertines with their snowy white deposits of calcium, that appear like something from the clouds, are unique to Turkey.  The waters edge at Salda will have you thinking that you were in the Seychelles with the crisp clean white sands and the clear blue water lapping gently against the beach.

After being picked up from your Belek hotel you will join the comfortable air conditioned coach and with a short introduction from your guide and you will be heading to Pamukkale and it’s ancient city of Hierapolis, sitting like a golden crown amid the top of the travertines.

The white rocks themselves are formed from years of calcified water, surfacing from underneath the mountain and forming the most inviting of rock pools.  With the blue anatolian skies reflecting in the calcified water, the promise of a cool water in which to kick  your heels is too inviting.

In order to preserve the whiteness of the rocks you are only allowed to walk along them barefoot.  Don’t be worrying about this.  The rocks are neither sharp nor slippery and easy to climb amongst.  Younger children particularly love this part of the tour, having an abundance of splash pools as they go along.

As you look down on the town of Pamukkale, you will realise that the scenery extends far beyond the human eye’s capability and that you are ascending towards an almost impregnable city from antiquity, Hierapolis.

Mentioned in the Bible and the burial place of St Philip the Apostle, you will see why this once great city was a prevalent force in the region.   Often thought of as the poorer relation of Ephesus, it was anything but that.  With its healing waters and thermal spa where Cleopatra bathed when she stayed in the city, you too can feel the healing properties of Hierapolis and its ancient history.

Your tour begins with a pick up at a round 06:00 from your hotel in Belek.  The journey takes around 3 hours to the Denizli region and Pamukkale.  There will be a comfort stop along the way.  You should arrive in Pamukkale at around 09:00.  The ideal time to discover the travertines in the early morning sunshine before it gets too hot.  There is free time when you reach Hierapolis also.

Lunch is usually at around 12:00 and will be a buffet selection.

After lunch you will head on to Salda and visit the lake.  At the lake you can experience some free time and either swim or relax in the sunshine before returning to the coach and back to Belek around 22:00.

How much is Belek Lake Salda & Pamukkale Tour?

Is this tour suitable for children?

Due to the diversity of the tour, families of all ages can enjoy it.  Not for the less mobile or very young children.  Older children of perhaps 5 and upwards, enjoy the travertines and can easily sleep on the coach to replenish their energies.

Is it easily accesible for all?

For anyone who just enjoys finding out about the country they are visiting, this is a must do.  The travertines are easy to climb no matter what you think, and the ancient city of Hierapolis is a history buff’s dream.

Are there rest facilities avaliable at Pamukkale?

The tourist centre houses restaurants and washrooms, together with souvenir shops and an outdoor picnic area, all alongside the mysterious Cleopatra’s Pool.  Most of the architecture has fallen into the spa waters and, if you choose to go in you will realise the allegedly healing waters are heated by a thermal spring.

What should i take with me?

Do wear or bring your swimsuit and towel, for the travertines and the lakeside swim in the afternoon.  Bring your suncream and sunglasses, together with a sunhat for those moments where there is little or no shade.

Wear good footwear for the walking aspect of the tour and do bring a camera, the opportunities to take amazing photographs will be manifold.

Don’t forget to bring money for those optional extras.

Can i walk on the travertines?

Yes, you can walk along the travertines however, you will not be able to wear shoes or footwear of any kind while walking along the travertines, not even basic flipflops.  This is non negotiable and should not be a problem.  The white calcified rocks may look like ice, but don’t be deceived by your eyes, they are not icy and in fact, are not at all sharp nor slippery. Should you see green algae in some of the rock pools you should take caution, these are slippery! 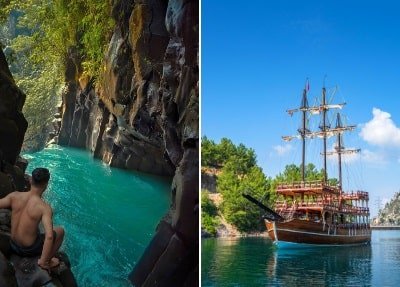