When you book with an account, you will be able to track your reservations and get access to coupons page.
Sign Up
7181
Book From Locals > Antalya > Antalya Pirate Boat Trip

Antalya pirate boat trip is more than just sailing on a pirate ship, with tall masts, through the clear waters of the Mediterranean. You’ll visit three of Kemer’s most beautiful lagoons and their grottoes, have a great time swimming, sunbathing, eating a delicious lunch and making new friends. Everyone will surely love playing in the clouds of foam that are shot by the cannon! A comfortable minibus will take you from Antalya to Kemer and back. Ready for an adventure? Let’s go!

Both transfers to and from Kemer to the hotel, lunch, foam party and other entertainment are included in the tour price.

Why are pirates, called pirates?  Because the arrgghhh.  Prepare to have a fabulous day out on the pirate boat leaving from the harbour at Kemer.  This is a day out that will appear to sea lovers and big and small children alike.  It may even bring out the child pirate inside the older generation.  This is so much more than your conventional boat trip and a must do for families in particular.

You will sail the seven seas (well the Mediterranean Sea at any rate) and visit hidden coves, caves and much more.  There is entertainment on board to keep you in the pirate frame of mind as the swashbuckler wearing crew help you to break the ice with some fun and games.

This is a great chance to take some impressive photographs and a day where old and young alike can free their imagination and help to capture treasure!  Even if the ‘pirate thing’ is not for you the stunning coastline of the South of Turkey will have you mesmerised by its beauty and you will certainly enjoy the day watching the waves.  Who knows you may even spot some dolphins!

You will be picked up from your hotel in the Antalya region at around 08:00 to 09:00 and brought, by transfer, down to the harbour at Kemer, where your pirate boat is waiting for you to board.  You will be greeted on the gangplank by your Captain and/or crew, welcomed aboard and shown the best seating or sunbathing area for the day.  Once you have found your ‘best’ spot on board your crew will be ready to up anchor and take you on your very own pirate adventure.

The tour lasts approximately 7 hours and you will be returned to your original point of pick up at around 16:30.  Your transfers, buffet lunch and boat tour are included in the price of your ticket, not to mention all the fun of the on board games and those amazing swim breaks.

As you familiarise yourself with the ship, you will cruise gently along the Kemer coastline towards the first port of call, as it were.  You will visit the pirate cave for a photo shoot at around 10:30.  Let your imagination take you as you gaze into the depths of the cave, imagining the plunder and treasure trove that might have sunk to the depths there.  Then you will proceed to the first swim stop of the day at ancient Phaselis Bay.

Combining beauty with the wonder of antiquity, the bay is shaded by beautiful green pine trees.  The colour of nature, edging the white sands that roll beneath the gentle blue, Mediterranean waves will leave you breathless.  You will stop here at Phaselis Bay for about one and a half hours, during which time you may swim, sunbathe, walk among the trees or visit the sites of antiquity.  Take your camera for those unforgettable backdrop scenes and with your own pirate ship waiting for you to step back on board, in the beautiful bay of Phaselis.

The second stop of the day is usually Cennet Bay, which translates as Paradise Bay in English.  It takes no imagination to see why it was thus named.  No crowds of people, just Mother Nature and the gentle swish of the sea.  Again this is a swim stop where you will indeed feel as though you were swimming in Heavens Ocean, and while you are enjoying the cooling waters of Cennet Bay your barbecue lunch is being cooked on board.  When your appetite is great and the aroma of barbecued fish or chicken reaches your nostrils then you will know it is time to board the ship once more, to enjoy your lunch.

The third stop for swimming will be Kiris Bay.  You will have the chance to marvel at the Turquoise waters of the Bay, which is under the protection of the Coastal National Parks.  A short swim break here among the large rocks that grace the Bay and then back to  the enigmatic pirate cave where you will have your last swim stop of the day.  This time you can swim into the cave itself and let your imagination race back to a time of pirates and endless caves of plunder. Once back at Kemer harbour your transport will be waiting for you to say goodbye to the Captain, crew and new found friends, as you prepare to go you back to your hotel or apartment.

How much is Antalya Pirate Boat Trip?

What days can I go?

This tour goes out every day of the week from March to the end of November.  It is great fun for families, singles or groups, with the chances to make new friends throughout the day.  Even if you are not a swimmer, the Kemer coastline and the clear blue waters of the Mediterranean make it a day to remember.

Do I need to take anything with me?

Do bring with you your swim suit and sun cream, this is the perfect tanning opportunity, a towel and sunglasses.  Bring some money with you for those little extras like drinks or ice creams.  Your camera or mobile phone is always a good idea too, for those unexpected moments you would like to record for posterity.  Do put any electronic items in a waterproof container as there will be plenty of swim opportunities where items may get wet.

What’s included in the ticket price?

You will have return transfers included in the cost, as well as a buffet lunch on board the boat.

What’s not included in the ticket price?

You should have some spending money with you for any extra drinks or snacks that you may wish to purchase throughout the day.  There will also be a professional photographer on board should you wish to purchase some photographs from your day at sea.

Are there toilets on board?

Yes, there are toilets and an open shower available to wash off the salty water.

Who is this tour most suitable for?

This tour is suitable for all members of the family young and old alike.  Children will have great fun with the entertainment crew and adults can choose to join in or sit back and relax as they choose.  Whilst this day is aimed to please families, couples and singles alike will be sure to enjoy their day out on the pirate ship too!

Are there shaded areas on board?

As the boat is 40 metres long with 4 tiers, you will find plenty of space on board.  There are sunbathing and seated areas for you to choose from.  The top deck is suitable for sun worshippers while the lower decks will provide some protection from the sun. 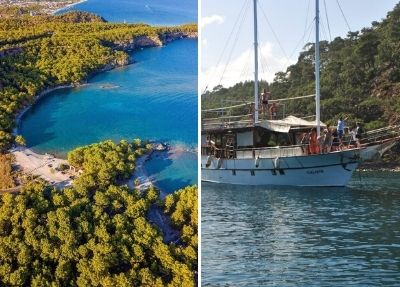 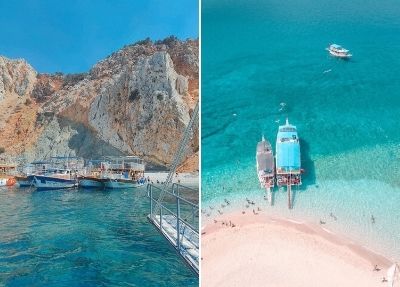